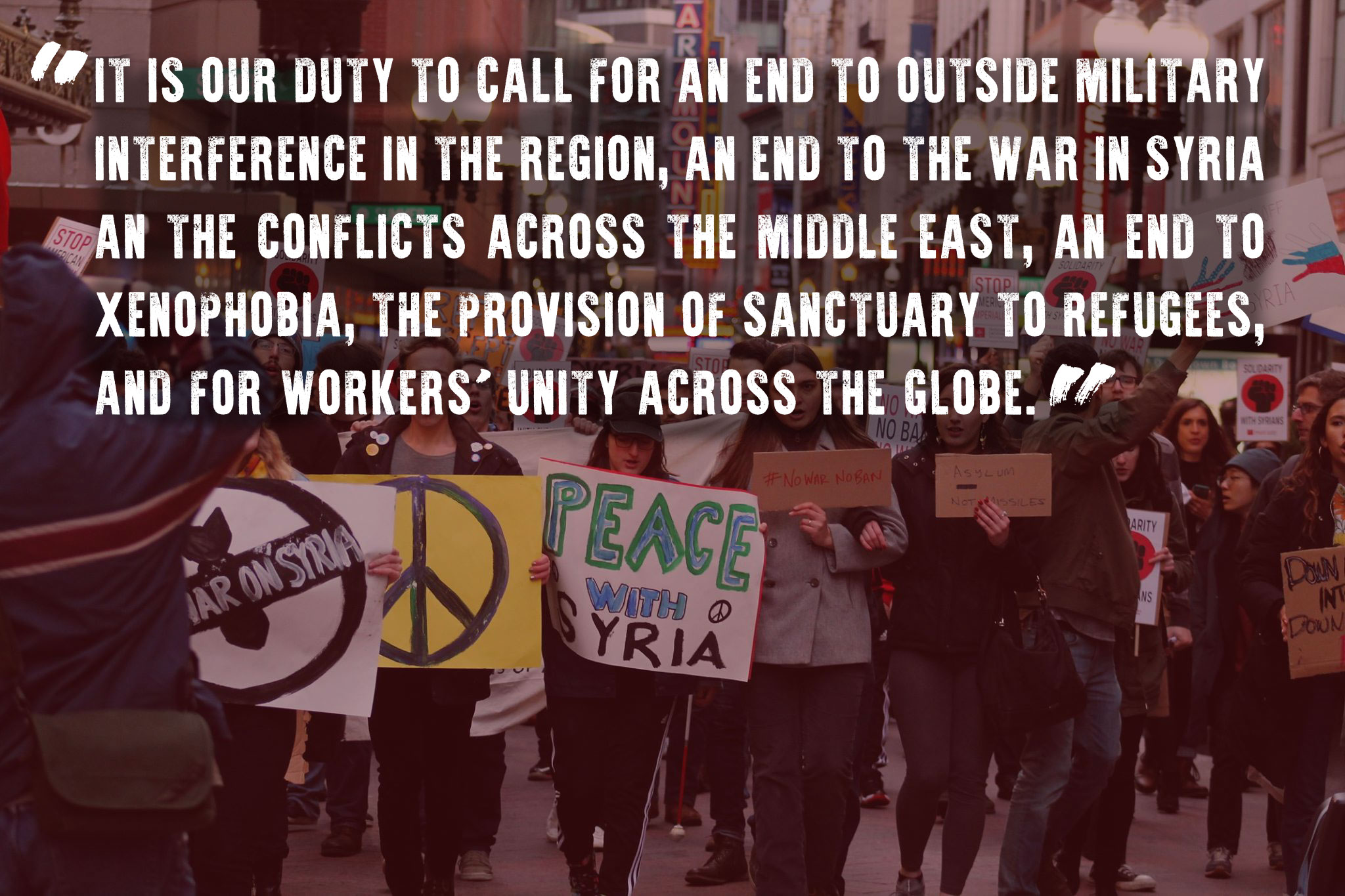 Last week, the conflict in Syria turned a new corner when the U.S. launched a missile attack on a Syrian air base, the first time the U.S. has intervened militarily against Assad. The strikes were allegedly a response to a chemical attack on Syrian civilians, likely carried out by the Assad regime. The recent airstrikes and the chemical attacks which proceeded them are only the latest examples of violent assaults carried out by capitalists against the people of Syria.  This morning, the tensions escalated as a U.S. drone strike “accidentally bombed Syrian allies,” and killed 18 people [Washington Post].

The conflict in Syria began in 2011 with demonstrations calling for political and economic reforms and an end to government corruption, a part of a series of protests across the Arab world known as the Arab Spring. The uprising quickly turned violent after the Syrian regime brutally repressed protests. Foreign powers and domestic insurgents have seized on the chaos in Syria to assert their own agenda. Russia and Iran seek to bolster their ally Assad, while various rebel groups and terrorist organizations fight for control of patches of Syrian territory. The U.S. has provided limited support to “moderate” rebel groups in as effort to counter ISIS and other extremist organizations. In many ways the conflict has become a proxy war between the U.S. and Russia. The civil war has killed more than 450,000 people, injured more than one million and displaced over 12 million, half of Syria’s pre-war population.

The recent chemical attack in Idlib was an atrocity, and requires an international response. However, we oppose the U.S. airstrikes and must work to ensure that this does not lead to greater U.S. military involvement in Syria. Despite claims that the air strike was carried out for humanitarian reasons, the Trump administration clearly does not care about the well being of the Syrian people. If Trump was really acting out of humanitarian concerns, he would open the United States to Syrian refugees, instead of trying to ban them. In contrast, Trump likely was seeking to boost his support at home and distract from his failure to meet his campaign promises. Trump also acted without the permission of Congress and without waiting for the U.N. to asses the situation. There is not yet solid proof that the Assad administration was behind the chemical attack, and Trump’s hasty action risks becoming directly involved with a conflict with Russia, Assad’s best ally.

Socialist Students is opposed to U.S. military intervention, but does not support any of the actors in this conflict. While some leftist groups support Assad as a bulwark against U.S. imperialism, the Assad regime carried out human rights violations such as torture and arbitrary arrests even before the war, and since the conflict began it has committed war crimes such as torture, rape, the use of chemical weapons, blocking civilian access to food and water, and the indiscriminate targeting of civilian areas. Additionally, while we backed the original rebellions against Assad, many rebels groups have violated human rights and do not have our support.

The answer lies not in supporting these groups, but in forming a broad workers party in Syria which is strong enough to oppose the Assad regime and foreign imperialists. This party must bridge sectarian and ethnic divides to strengthen the entire Syrian working class in the face of capitalist violence. It must be armed with socialist ideas like the transfer of the region’s wealth into public ownership with democratic planning, defending the democratic rights of all ethnic and religious groups, and forging links with the labor movement across the region. Likewise, socialists across the world need to take a stand against the violence and repression in Syria.  It is our duty to call for an end to outside military interference in the region, an end to the war in Syria and the conflicts across the Middle East, an end to xenophobia, the provision of sanctuary to refugees, and for workers’ unity across the globe.